Ahhhhh – wasn’t that a nice little vacation from blogging? Kind of unplanned, in the sense that I planned to do too many things over the past month, and things like blogging and cleaning the house [oh, how I wish I were kidding about that!] had to take a back seat. Now, this morning, our phone is out, so I can’t work, and I have the choice of blogging or cleaning. Guess which one I chose?

Regular readers will perhaps remember that I flew in an airplane for the first time in 2009. I have always been queasy about heights – just thinking about looking down from a place like the Empire State Building, or a step ladder makes my feet feel all weird. “Squinchy” is the way I thought of that feeling when I was a kid. Fear wasn’t the only reason I hadn’t flown before. We didn’t have the money and/or the time for most of our adult lives. Not wanting to, definitely played a part in the whole thing – the idea of flying was mentally “off the table” when planning any kind of trip. Plus, we rather enjoy car trips, so that was our preferred mode of travel.

I only made two trips on public transit when flying would have made sense to people who get on planes. One, by bus, to help my sister after knee surgery was, um … interesting, where interesting means bizarre, weird, uncomfortable and stinky. The other, by train, to hang out with Mark while his little sister was being born, actually was truly interesting and really fun. And not stinky at all. But then, when my sister in law died, I finally had no choice but to get on a plane. I made my reservation, certain I would throw up and then die in a fiery plummet to earth. Reality was scary, then not as scary, then pretty cool, then pretty freaking scary. [little bitty plane, big plane that was delayed forever, big plane at night with a smooth as silk flight, little bitty plane in the remains of a bunch of big storms, with so much turbulence that the stewardess canceled drink service – I think she was puking in the bathroom, maybe]

We have flown twice since that first trip and no one is more shocked than I about the fact that I absolutely love flying. It’s fun. And beautiful. 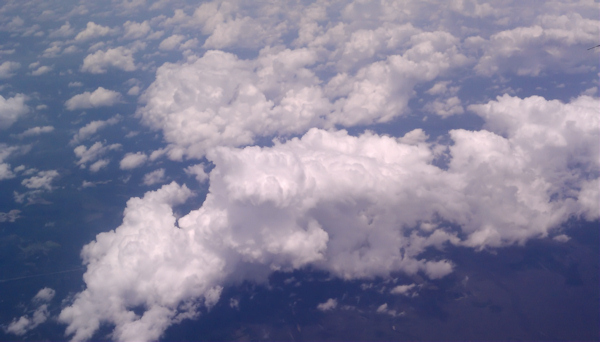 Ice cream castles in the air

I took these photos on the way home from Georgia, over someplace down south. We ended up sitting in the Detroit airport for many hours past the time that our connecting flight home was supposed to have left, finally squeezing on the last weather delayed flight of the night. But even that was great, since we were treated to a beautiful night-time view of the Finger Lakes as we flew into Ithaca.

Rows and flows of angel hair

Fast forward a couple months, and come down to earth to see these photos of the beginnings of a night of horrific storms that made an incredible mess all over our area, and knocked out our power for about 20 hours. You could just tell this was going to be a bad storm. 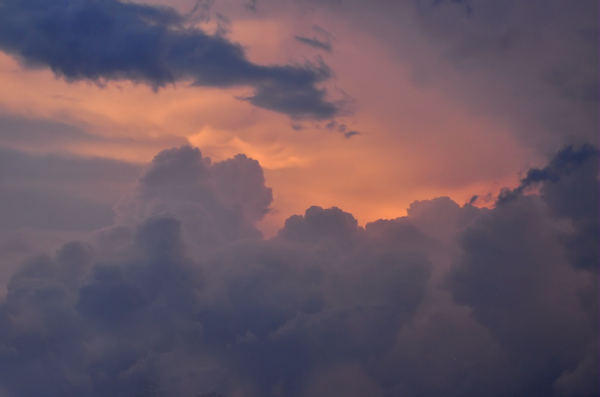 Feather canyons getting ready to rain on everyone

I don’t think Joni Mitchell was talking about the difference between clouds from a plane, and clouds from my front porch, when she wrote the song, but I like the physical ‘both sides’ of clouds myself.

Blocking the sun - with a vengeance

But then, I’m rather fond of life’s illusions too, which is apparently evident in the fact that while everyone else is complaining about crowded airports and delayed flights and weird fellow passengers, I’m just looking forward to the next time I get to see the tops of the clouds.

this is the version of “Both Sides Now” from Miles of Aisles, in case you would like to give it a listen

This entry was posted in Blogging, photos. Bookmark the permalink.

7 Responses to Both Sides