I’ve been cooking a long time, but I realize that not everyone grew up the oldest of 5 kids who were spread over 15 years. My Mom was and is a great cook, though with all the younger sibs around, she was happy to let some of the cooking land on my shoulders as soon as I was able and interested enough to not kill anyone with efforts gone wrong.

Cooking to me is pleasure and creativity and a way to share something with other people. If you have never tried it though, it seems a bit nerve-wracking and maybe even impossible. A lot of the comments on posts where I share my recipes are along the lines of “I could never do that”, or “that is too complicated for me”. It is only complicated or difficult if you have never learned how. That’s why I am going to start offering some very basic and easy techniques for those who didn’t grow up with a great cook. This is one such post – it’s the starting point for a whole bunch of really good food.

Some people might be daunted by this sight – a raw winter squash.

This is another “Argonaut”, like Sylvester, but at a mere 14 pounds he is a pale shadow of our new adopted family member. “Argonauts” are a butternut type squash, but one that abused steroids. I was really beginning to worry about them as we watched them grow bigger and bigger over the summer. Could anything so large still be tasty? Oh yes. We got our seeds from Gurney, but I believe other companies carry them as well.

One thing I love about this type of squash is the long neck that has no waste at all – the seeds are all in the bulbey part. I did a couple different things with this baby – roasted some cubes for a recipe I will blog later this week, and then roasted the bottom part in large pieces as I planned to puree it for soup. This will work for any kind of winter squash and it the same method you use to cook pumpkins. I like it better than peeling and cubing the squash and then cooking it in water on top of the stove, for two reasons – it is easier and the final result is more flavorful, with no wateriness.

Wash the outside and carefully cut it in half the long way. I cut off the long neck first. 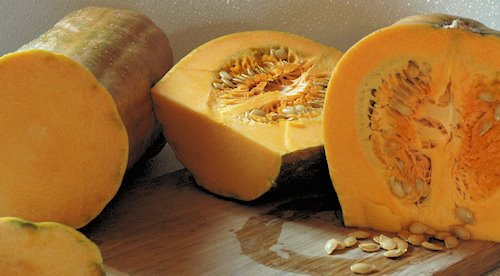 Scoop out the seeds, which can be roasted just like pumpkin seeds if you like.
Cover a heavy cooking sheet with parchment paper, and lay on the squash, cut side up. I know already that this is going to be used for a savory application, so I salted and peppered the cut sides. 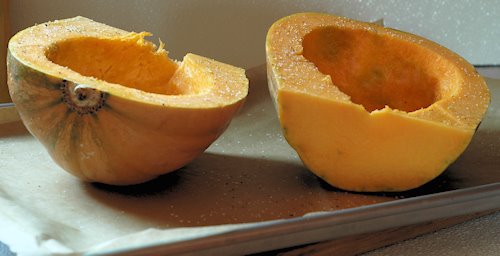 Roast until it’s very soft, poking with the tip of a knife to test it – probably about an hour to 90 minutes. 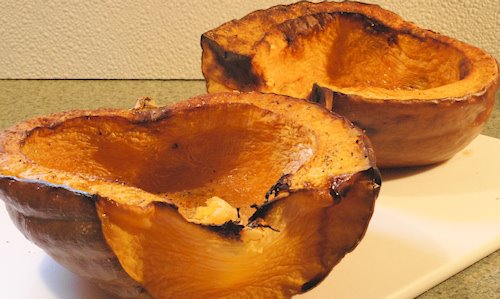 Leave it on the pan until it is cool enough to handle. The bottom will likely be covered with a sticky caramelized juice that can be somewhat difficult to remove from a surface like a cutting board. That is why we use parchment paper and leave the squash there to cool.

Once cool, use a large soup spoon to scoop out the flesh, being careful not to get any of the skin. Squash skin is not very tasty, so if you accidentally scoop too hard and get some mixed in, pick it out. The caramelized cut surface of the squash is really good though, so make sure you get that too. 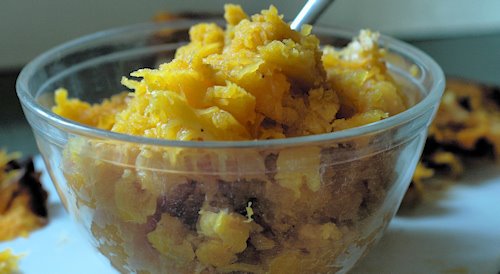 Once it is all in a bowl, you can puree it like I do, with my trusty immersion blender, or you can scoop it directly into the bowl of your food processor or blender or food mill. Which ever method you choose, process until it is as smooth as you like it. It will get thinner in substance if you go too long though, so stop short of that. I like the immersion blender because 1. I hate cleaning my food processor and 2. It seems like I have more control over the texture. 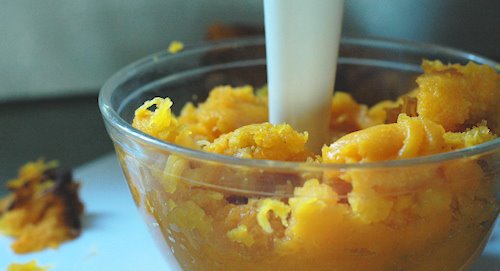 See? All nice and smooth. 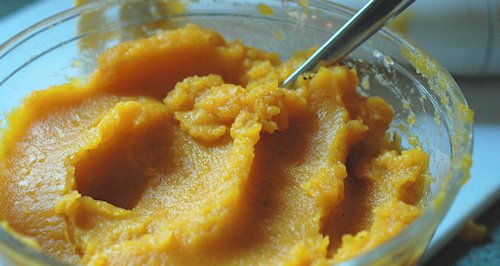 At this point, you can mix in some butter, salt and pepper and maybe some brown sugar, maple syrup or {my personal favorite] blackstrap molasses. Put it in a greased baking dish and stick it back in the oven for about 30 minutes to get it steaming hot and to blend the flavors.

You can use the puree as you would pumpkin for breads and pies [we will get to those] or use it in soup. Or freeze it in meal sized portions to use later on.